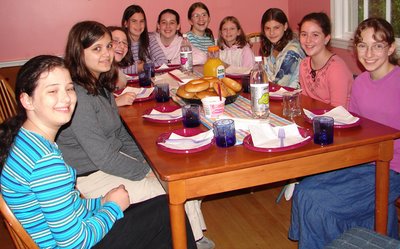 I have now confirmed that I have the greatest, sweetest, most awesome Editorial Board!! Here’s the story…
My mother told me that today she would have a meeting in the morning and that no kids could be in the house. So okay, she doesn’t usually have too many meetings in the house but I was not too surprised. So I went to the mall with my father and sister while my brother was at a friend’s house. (On a side note, it wasn’t a very successful shop since when we got there none of the stores were opened yet…)
So I came home and as I open the door I hear a Chanale CD playing. Hmm…my mother doesn’t usually listen to Chanale…especially during a meeting! Then I see my mother holding a camera…ok, something very fishy is going on here. SURPIRSE!! Eight Editorial Board Members from this year and last year that live in Massachusetts came downstairs!!! I was soo surprised! I still can not believe they planned this whole thing without me knowing. Many of them I had never met in person. We had a two-year-old birthday party for YALDAH complete with lunch and a birthday cake, made stationary, designed YALDAH covers, got each others autographs, and just enjoyed getting to know each other in person!
Thank you to Chavie Resnick, Talya Wasserman, Tamar Wasserman, Batsheva Goldberg, Briana Rubin, Becah Kaplan, Leah Garcia, and Jenna Grady for making the effort to come, even though some of you live over an hour away. I wish ALL of our Editorial Board Members (even from as far as Switzerland!) could have been there, but you were with us in spirit! Thank you to all the girls who put so much time and planning into this, especially Chavie Resnick and Talya Wasserman. You are really amazing!
G-d Willing, we should have a giant YALDAH reunion in Israel with Moshaich NOW!!
(But if not before December, then at the Jewish Girls Winter Retreat–see the previous post!) ;-)