Sara was 16 years old when the news came that the Germans were going to invade her small town in Poland. Her mother and father devised a plan to save them. In the outskirts of their town was a small path that led to the next town which was really as small as a neighborhood. Sara’s grandparents lived in that town and they planned on packing up as few possessions as possible and going to their grandparents in the next small town because the Germans would definitely not focus on such a small unimportant town that has such few families in it and most were Gentiles. Sara wanted to say goodbye to some of her friends and had some other random things to do before she was ready to leave, so she told her parents to go on ahead of her and she would meet them there. They were very reluctant to let her but she insisted saying she was responsible and Hashem (G-D) would help her there safely before the Germans came. She stepped out to leave when she saw German soldiers swarming the area. Realizing the terrible danger she was in, she went back inside and thought what she can do to help herself. She decided the less Jewish she looked the better. She opened her buttons open so her shirt was wide open and took her hair out flying so she looked like a Goyishe (not Jewish)  girl. She was about to go out when she couldn’t. She stopped and thought about how she looked and how Untznius (not modest) she was. She decided to take a risk and go out but be tznius (modest) at the same time and Hashem (G-D) will surely help her. She re-buttoned herself up and put up her hair nicely and with her head held high walked to her grandparents’ home. When she arrived, her parents and grandparents were so relieved to see her and told her when she didn’t arrive before the invasion, they thought something had happened to her. That night as she got undressed she was shocked to see under her shirt was the star of David necklace. If she had stayed unbuttoned, she would have immediately been spotted as a Jew and been in serious danger. Being Tznius (modest) saved her!! This story shows the importance of a Jewish Woman’s Tzniut (modesty). 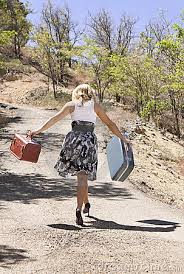